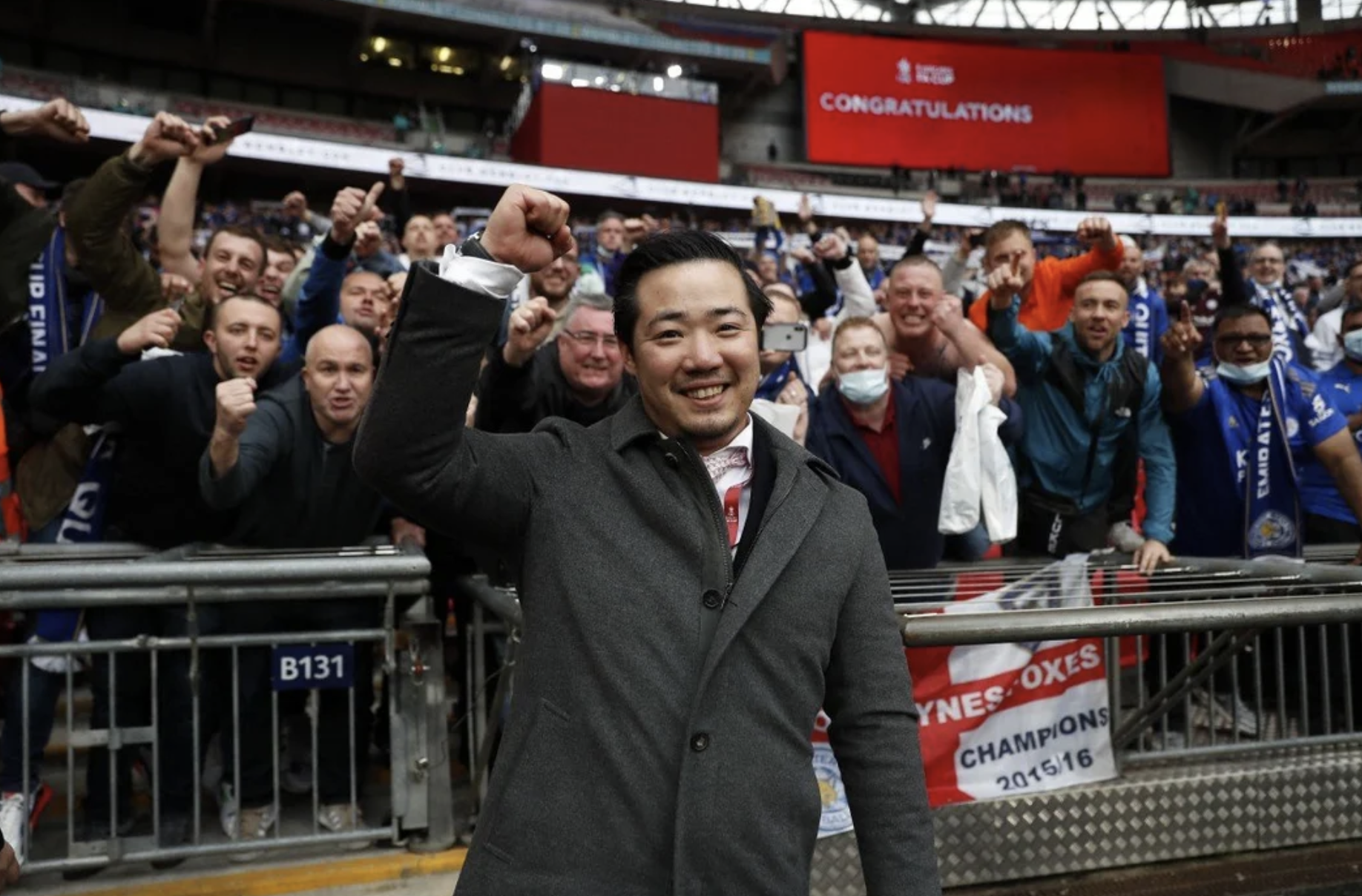 Premier League club owners are not flavour of the month right now.  In the wake of the founding and the subsequent collapse of The Super League – the breakaway competition designed to guarantee access to European football to Europe’s biggest clubs – owners have been cast as villains in a battle for football’s soul.

Fan reaction to the competition’s conception on Sunday 18th April was swift and severe, prompting the six clubs to formally withdraw within 48 hours.  Fan anger continued, resulting in the postponement of Manchester United’s home game to Liverpool on Sunday 3rd May as fans broke into Old Trafford to protest about their owners’ stewardship of the club.

Meanwhile, 100 miles south of Manchester, Leicester City Football Club were applying to the City Council for planning permission for a statue to honour their late owner, Vichai Srivaddhanaprabha who died tragically in a helicopter accident at the club’s ground in 2018.  A covering letter submitted with the plans, stated that the statue “aims to both respect the legacy of Vichai Srivaddhanaprabha and enhance the overall experience for supporters visiting the King Power Stadium.”

This is a fitting summary for the King Power project – a desire for a positive ownership legacy with fans at the centre.   The reaction of the players in the wake of the club’s dramatic FA Cup victory was a case in point.  Kasper Schmeichel, the club goalkeeper and hero of the final having pulled off one of the competition’s great saves, left his teammates to bring the club’s Thai owner Aiyawatt ‘Khun Top’ Srivaddhanaprabha into the celebrations.  Khun Top embraced the players before seeking out Brendan Rodgers, the Head Coach, to acknowledge the role he has played in the club’s recent success.  Against a backdrop of philosophical friction between fans and owners, the scenes at Wembley were a refreshing reminder that foreign ownership can work.

Success in football is ultimately measured in silverware.  As competitive balance in Europe’s leagues diminishes, the prizes are increasingly concentrated among those teams with the most money – our analysis at Twenty First Group shows that while it is possible to materially outperform your budget, there aren’t many clubs that manage it on a consistent basis.  Leicester are one.  At the weekend, the club lifted the FA Cup for the first time in their history.  In the Premier League era, Leicester are the only team outside of England’s ‘Big 6’ (consisting of Manchester United, Manchester City, Liverpool, Arsenal, Chelsea and Tottenham) to have won both the FA Cup and the Premier League.  Both historic triumphs have come since the Srivaddhanaprabha family took over the club.

Through a combination of capital investment, sensible financial management and clear-eyed football strategy the club are continuing to challenge the dominance of England’s biggest, wealthiest clubs. Since the takeover in 2010, Leicester have progressed from being a Championship club to one of the finest teams in England – as it stands, they have around a 65% chance of finishing inside the top 4 and despite their financial disadvantage, over the last five seasons their finishing positions in the league have been 5th, 9th, 9th, 12th and 1st.  But how have they done it?

Transfer strategy has been one notable success.  Over the last five years, the club has a net transfer spend of a little over £20m per season  – around half the Premier League average and around one third of the ‘Big Six’ average – while maintaining their levels of performance.  The £75m sale of Harry Maguire was followed by the £18m purchase of Calgar Söyüncü from Freiburg in the German Bundesliga.  The £45m sale of Ben Chilwell to Chelsea was followed by the £21m purchase of Timothy Castagne from Atalanta in the Italian Serie A. The £60m sale of Riyad Mahrez to Manchester City was followed by the purchase of James Maddison for £20m from Norwich City in the English Championship.  The £30m sale of N’golo Kante to Chelsea was followed by the purchase of Wilfred Ndidi for £15m from Genk in the Belgian Pro League.  From these transfers alone Leicester made around a profit of over £130m while generally managing to maintain their performance levels.

Outside of recruitment, the club has also tended to choose their managers wisely, with an average manager tenure of just under two years compared to a Premier League average of around 1.5 years.  In addition, the club has invested in a world-leading training facility suggesting that the ownership are investing for the long term.  The scenes at Wembley speak of a club in sync from the boardroom to the pitch, and are a shining example of how effective ownership can deliver positive outcomes where it matters.

In addition to delivering success on the pitch, the owners have also recognised the wider role that football clubs play in their community.  The owners have taken this responsibility seriously which has gone some way to building bonds that run deep.  The club has provided material financial assistance to various community causes, including £1m to a city University hospital, £1m to the LCFC Foxes Foundation and a further £2m to a local children’s hospital.  As Club CEO Susan Whelan explained in 2016 “It’s very important for every fortunate thing that happens to you in your life, you must give back.  That’s really integral to everything we do.  This is through the Srivaddhanaprabha family, this is King Power, this is Leicester City Football Club saying thank you to the city of Leicester”.

And it’s not all high-minded philanthropy – there is a sense of fun that also pervades.  In celebration of his 60th birthday, Khun Vichai offered free Singa beer – Thailand’s native drop – to every home fan attending their game against Newcastle United, and renewed 60 season tickets, chosen at random, at half time for free – a gesture that significantly softened the blow of the 2-1 defeat.

“The family are very, very popular with the people of Leicester.  They are loved by the Leicester public for what they have done to the football club and for what they have done for the city.  They have put the city on the map worldwide,” said Leicester City Supporters Club Chairman Cliff Ginetta. “They’ve put millions of pounds into the club and lots and lots of money into local hospitals, children’s care. At Christmas time, it’s free mince pies and a drink — and that’s the way they are.”

Given the number of bad examples, fans are right to be cautious about the intentions and competence of new owners.  But the Srivaddhanaprabha family is a beacon of hope at a time when many foreign owners are being tarnished with The Super League brush.  Prior to the FA Cup final, Schemichal summed up the effect that Khun Vichai and Khun Top have had on the club.  “It just goes to show … how good foreign ownership can be.  The journey from when the family came in and bought this club is testament to that.  They have shown commitment right from the start and all the way through to today where we stand in a FA Cup final and [with] a training facility that is probably the best in England, if not the world.  They keep investing in the club, they keep building that bond with the fans. It’s very well documented how good a relationship we have with the family.  We don’t want to disappoint them, we want to make them proud”.  Watching him usher Khun Top into the celebrations following the club’s triumph in the FA Cup final, it is hard to disagree.

This article was originally posted in the South China Morning Post.