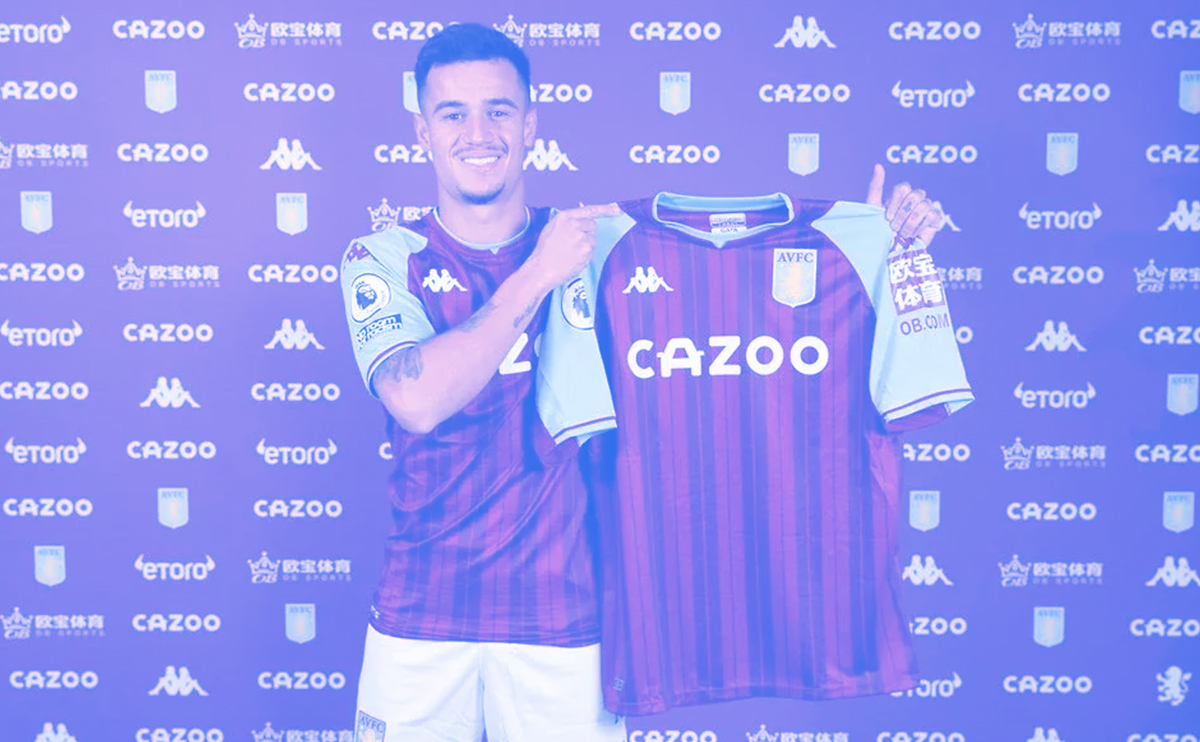 The closure of the 2022 January transfer window raises the usual questions about the winners and losers, the best deals, and the trends in the market. Using our intelligence engine, we can unpick what happened and why in Europe’s major leagues.

Who were the Window Winners and Losers?

Given their recent takeover and perilous league position, attention was firmly on Newcastle United during the January window. Our models suggested that they executed a successful string of deals, with their £92m of reported spending – four times the historical league average – moving their relegation odds from 63% to 48%. 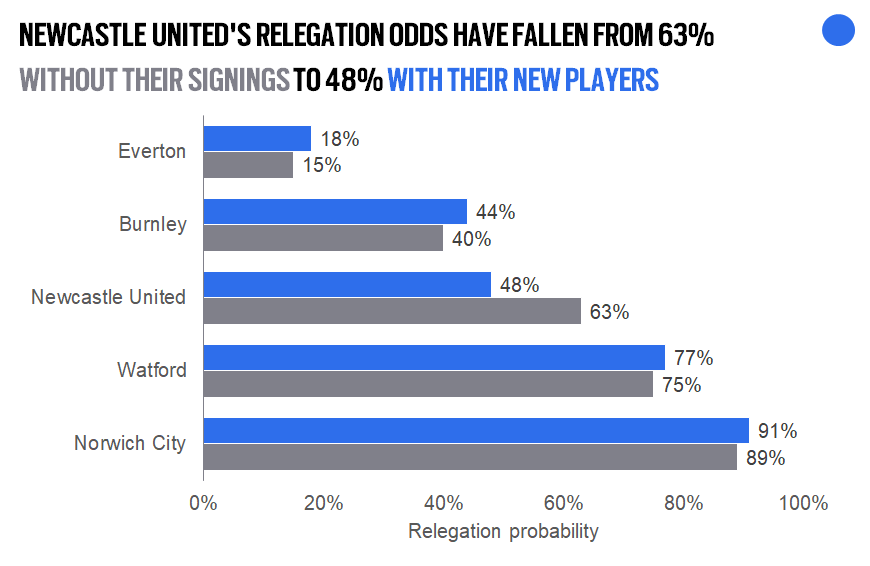 This improvement stems from Newcastle strengthening their starting eleven with the acquisition of 3 defenders (Kieran Trippier, Dan Burn and Matt Targett) and a midfielder (Bruno Guimãres). These are signinings our models show are likely to play more than 70% of league minutes based on their quality, position and competition from within the current squad; this would represent a major success given the majority of new signings fail to even play 50% of minutes.

However, the signing of Chris Wood from Burnley could prove to be their shrewdest piece of business, as not only has it strengthened their squad but it has also weakened a relegation rival. Our models estimate that by weakening Burnley’s attack and improving their own, Newcastle reduced their relegation chances by around 7% whilst increasing Burnley’s by about 8%, before Burnley brought in reinforcements.

Headlined by the arrivals of Philippe Coutinho and Lucas Digne, our models show that Aston Villa have also been one of the window’s big winners. The arrivals of Coutinho, Digne and Calumn Chambers have improved Villa’s chances of a top-half finish from 49% to 67%. They now also have an almost 10% chance of finishing 7th, which is now likely to become a European place after Liverpool and Chelsea confirmed their places in the EFL Cup final. As a result of a successful January transfer window Aston Villa’s hopes of finishing 7th have almost doubled from 5% to 9%.

According to our models, although making a net profit of £14.4m this window, Burnley have been the biggest loser of the January transfer window. The sale of their most prolific forward Chris Wood, who has scored 30% of their league goals between the 17/18 and 20/21 seasons, to relegation rivals Newcastle is a significant blow.

This is likely to lead to a weaker goal return. While Wout Weghorst has signed to replace Wood, he has arrived from the Bundesliga where goals are slightly easier to come by, and having played for a team that created more chances on the whole. Using our exchange rate model (that converts goals from one league to another based on league strength) we can see that 1 goal in the Bundesliga is worth 0.9 in the Premier League, meaning his rate of 0.29 goals per game is likely to deflate slightly in England. This combined with Burnley scoring fewer than 0.7 goals per game compared to Wolfsburg’s 0.85 could mean Weghorst may find it harder to find the back of the net. Considering the above our models are estimating that Burnley’s relegation odds have increased from 40% to 44%, marginally below Newcastle thanks to the fact that 12 of their remaining 20 matches are at home, and 5 against immediate rivals.

The previous three transfer windows have been marked by the effects of Covid, but Premier League clubs in particular approached January with the confidence of having fans back in stadiums and positive news about international broadcast deals. Spending was at its highest since the January 2018 window, and despite Brexit regulations the league’s deficit was as high as it has ever been in a winter window, at €194m. The league saw an increase in its historical share of overall ‘big 5’ spending by five percentage points to 46%.

Serie A was also a notably higher spender, with recent investment in the league helping fuel a 57% increase above its long-term historical average, while France’s Ligue 1 was the only league to generate transfer income across the division this window.

The reduction in volume of deals during the last three transfer windows has seen clubs build up excess in the fringes of their squad. During the January 2022 window, we saw some of that excess released in the form of loans. Challenges with cash flow and a tendency towards risk aversion have also seen the rise in loan-to-buy deals.

As a result, this winter the value of players loaned in the Premier League accounted for 24% of the total value of players transacted, well above the long-term historical average of 19%. This also reflected the fact that many of the loaned players were older, with the average loan signing being 24 years and 8 months – virtually peak age for some positions. With regulations around the number of loan deals for senior players looming however, this is unlikely to become the norm, as clubs will need to find other ways to trim the fat in their squads. 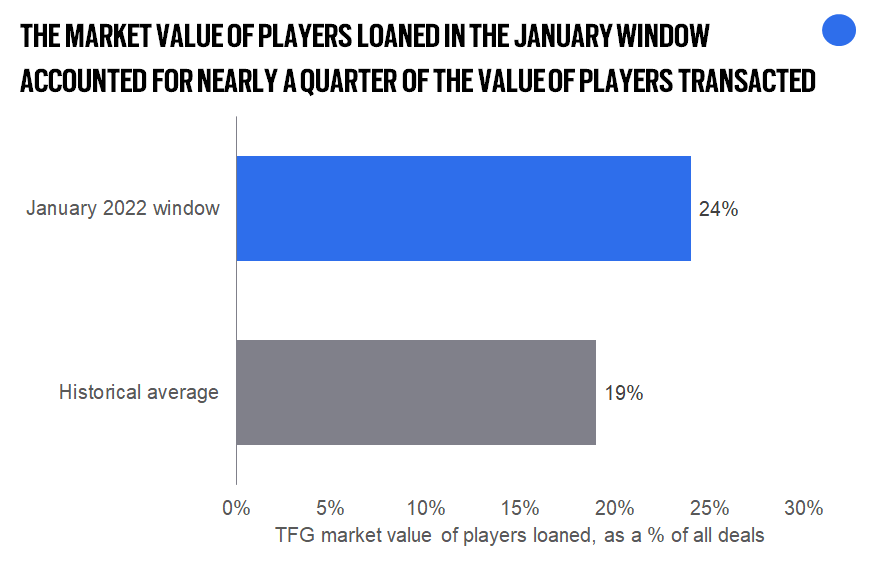 What was the best value deal?

According to our player valuation model, Tottenham’s signing of Rodrigo Bentancur was the most undervalued deal of the window in the Premier League, reportedly costing around half of our €40m valuation for the Juventus player. Acquiring a first-choice player from a Champions League last 16 team normally comes at a premium.

On the flip side, Everton’s purchase of Nathan Patterson reflected the club’s own estimations of the Scot’s potential. Our model valued him at €5m, far below the reported €14m paid. Patterson had played less than 600 professional league minutes for Rangers, and while expectations are high it is rare to see such inexperienced players transact for such sums.

After two years of covid the 2022 January transfer window has shown further signs of football’s recovery, with spending reaching higher and more recognisable levels. As we head into the second half of the season we will all watch with interest to see the impact that the January signings have on final league positions, relegation, and the race for trophies.

If you would like to find out more about our performance intelligence tools and services please contact Omar Chaudhuri.